skip to main | skip to sidebar
Newness for a New Year 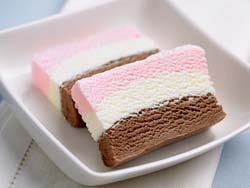 My niece Cora is visiting Provo this weekend. She loves everything Provo, and although she is only 4 years old, she remembers everything she has ever done in Provo. She'll always say, "Don't you remember when we did (fill in the blank with all kinds of things from places visited, to foods eaten, to things said) ?" "No, I didn't remember that." is usually my response. I am amazed at what she can remember.

Anyway, we were in the grocery store last night to get some food for the weekend. I told her she could pick out some ice-cream. She decided on the kind with "vanilla, chocolate, and stra-a-a-awberry." I responded, "Oh, you want neapolitan." She quickly asked, "Why is it called that?" I went to give a response and then realized, I had no response. "I have no idea," I said.

I have been eating neapolitan ice-cream for years, and I have known the name for about as long, but I don't know why we call it that. So, my question for any blog readers out there, "Why do we call it that?" I know that I can wiki or google this, but I want to know if any of you know why of your own intellect in the moment you read this. If you do, please comment and let the rest of us know. Then I will pass it along to Cora because she won't forget that she asked me.
Posted by Breanne Grover at 6:55 AM

I won't say because I went straight to Wiki to find out the origin. It's actually kind of obvious I guess. BUT, today's featured article is on the Gold Plates which I thought was kind of interesting.

I am a well of useless info, and I have no idea, I am about to go find out, but I won't return to tell you.

My best guess is this....
Neapolitan ice cream was named in the late 19th century as a reflection of its presumed origins in the cuisine of the Italian city of Naples, and the many Neapolitan immigrants who brought their expertise in frozen desserts with them to the United States. Spumoni was introduced to the United States in the 1870s as Neapolitan-style ice cream. Early recipes used a variety of flavors, however the number of three molded together was a common denominator. More than likely chocolate, vanilla and strawberry became the standard for the reason that they were the most popular flavors in the United States at the time of introduction.

Okay I wikied it and there it is, since no one answered the question actually on the blog.